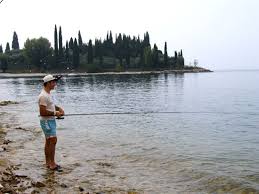 Good places to fish in the Brescia shore:

Good places to fish in the Verona shore:

Good places to fish in the Trentino shore:

The Main Fish of Lake Garda

Fishing on Lake Garda was an important economic resource in the past, and the fisherman’s work was difficult and demanding. Besides having to know all about the habits of different fish species, he also had to perform various tasks. He had to be an excellent carpenter to repair the boat, a fine weaver to prepare fishing nets and, above all, he had to know everything about the local environment and weather conditions.

There are more than thirty fish species in Lake Garda. The following charts are a summary and adaptation of a book by Enzo Oppi entitled “Pesci, pesca e cucina del lago di Garda” [The Fish, Fishing and Cuisine of Lake Garda“], published by the province of Verona and “Cooperativa fra pescatori di Garda”.

Lake shad has a bluish green back, silver sides and a white belly. Several distinctive black spots dot the skin from behind the eye down to half of its body. It does not exceed 35-40 centimeters in length and lives seven to eight years. InLake Garda there are shoals of tens of thousands of lake shad all of the same age. During the cold season it lives at a depth of 50 – 200 meters and periodically swims to the banks, perhaps in search of food. When spring arrives, the lake shad swims to shallower water to reach its spawning grounds. The lake shad eats plankton, preferring several species of these tiny crustaceans, and insect larvae. As Floreste Malfer poetically stated, lake shad and bleak were the main source of income and food for Garda fishermen for centuries before the lavaret white fish was first brought to the lake. Its meat is quite tasty and a bit fatty. Lake shad is excellent in the fall and winter, when it reaches its maximum weight.

Bleak is a small cyprinid with a sleek body. Its back is a bluish green, its sides are silver and its belly is white. It has tiny scales with a pearly sheen. Bleak lives in shoals in the lake and feeds on plankton, small invertebrates and plants. For many centuries this species, along with the lake shad, was the daily staple of the people on the lake garda. Its meat, which is quite flavorful prior and during the spawning season, becomes bitter in the summer when it incorporates plants in its diet. Used fresh, salted or sun-dried, it is a wonderful dish for people who appreciate fine food.

The body of the eel is long and cylindrical. Its dorsal and anal fins are attached to the tail fin, and it has no ventral fins. Its snout is fairly long, and its mouth has a prominent jaw and tiny teeth. Its small scales are imbedded in the skin and covered with considerable slime. The fresh water eel feeds on tiny creatures on the bottom of the lake, where it always lives. The eel mainly feeds and moves at night. After living at least 8 to 10 years in fresh waters, when it has a greenish brown back and yellowish white belly, the eel enters the process of sexual maturation. Its back turns a bluish black, its belly turns a silvery white, its eyes become bulging, its snout more tapered, and its skin becomes thicker. Its meat in this period is particularly oily. Thanks to correct fish raising methods, the meat of the Lake Garda eel is always delicious.

This strange fish that lives on the bottom of the lake is similar to the codfish. It has a long body that is cylindrical at the front and narrower closer to the tail. It has a large head and a wide mouth with a single barb on its jaw and two short barbs near the nasal cavities. Its tiny scales are covered in slime. Its back and sides are yellowish brown with dark spots also on the fins. Sometimes the fish has a greenish tint. The colors fade near the belly, which is predominantly white. The burbot can reach 60 centimeters in length and weigh 3 to 4 kilos. Theburbot has a very large liver which is discarded, even though it is quite flavorful. Larger burbots have white meat and no bones. Despite the ungainly appearance of the burbot, its meat is quite delicious. Nearly 50% of the fish’s weight is discarded during the cleaning process due to the size of the head and spine.

The carp has a slender but strong body that is tall and slightly narrow on the side. The mouth has four barbs, two of which are much shorter. The “wild” version has large scales edged with gray-black, while the mirror carp has scales of different sizes and the leather carp has almost none. This cyprinid can exceed 100 centimeters in length. The carp lives on the muddy, slimy lake bottom which is full of plants. It feeds on invertebrates and is mainly active at night. Like many other species that prefer warmer waters, the carp leaves the coastal waters during the winter and seeks warmer temperatures deeper at the bottom of the lake, where it goes into a sort of hibernation and stops eating until the lake waters start warming again. The carp is popular in the southern part of Lake Garda. It has fatty meat with a distinctive, delicious flavor.

The large lake carp is a salmonid that is very similar in shape to a young trout. It only lives in Lake Garda, even though many believe the contrary. The female is silvery in color all year round, while, the male turns very dark and almost black during the spawning period. The fish has black spots that form X’s on its sides. It is not easy to distinguish the large lake carp from young lake trout. This fabulous fish rarely surpasses 40 centimeters and one kilo in weight. Its natural habitat is the southern part of the lake with its abundant food supply. The large lake carp migrates from this area twice a year to spawn at great depths on the clean gravel bottom in several areas of the middle and upper sections of the lake. Like the trout, the meat of this fish is either white or red. Its flavor is exquisitely delicate outside of the reproductive period.

The strong, streamlined body of the chub is covered with large scales with gray-black edges. Its back is a greenish brown, its sides are a silvery gray and its belly is white. In lake waters this cyprinid can reach 60 centimeters in length and weigh more than 3 kilograms. The Cavedano lives in shoals formed by many individuals and feeds on many types of foods, which is why it is considered omnivorous. Sports fishermen love this fish because of its size and its proverbial astuteness and combativeness. Professional fishermen do not deliberately catch this fish because its economic value is low, but will eat it if it comes from the center of the lake and is caught with lavaret white fish or lake carp. The chub from this part of the lake is exquisite: its tasty white meat has many bones that can removed by filleting or frying in hot oil.

The lavaret white fish was first introduced into Lake Garda in 1918. The body of this salmonid is fairly slender. Its back can be olive green, light brown or gray. Its sides are silvery and its belly is white. Its maximum length is about 80 centimeters and its maximum weight is 4 kilos, but lavaret white fish of this size are rarely found in Lake Garda. The lavaret white fish almost exclusively feeds upon insect larvae and the crustaceans that make up a large part of zooplankton. Its white meat is a favorite because it is so delicious: it is lean, easy to digest and almost complete free of bones. The fish is at its best in July and August, but it cannot be caught in July because fishing nets could serious harm the lake carp during their spawning season. The meat of the lavaret white fish is stringy before and after its reproductive phase due to the strain placed upon it during the period in which its sexual organs reach maturity.

The body of the pike is streamlined, cylindrical, and slightly narrow on the sides. It has a long, pointy, duckbill snout and a wide mouth with a prominent jaw and very large, sharp teeth. Its camouflage coloring blends in with the environment. Its back is a brownish green and its sides are greenish, yellowish and silvery, and are striped or dotted with darker spots. The pike in Lake Garda can exceed one meter in length. It is a solitary predator that hides in the vegetation and quickly shoots out to capture its prey. Both professional and amateur fishermen love to catch pike due to its firm, compact, tasty meat. In fact, there?s an old saying “carne de lusso carne de musso” (“pike meat, donkey meat”), and there?s nothing better than a plump pike caught outside of the spawning period.

The body of the perch has a high arched back and is narrow on the sides. Its back is brown, its sides are greenish or yellowish, and its belly is usually white. Its color tends to blend with its surrounding environment. Its ventral, anal and caudal fins are red or orange, and the first dorsal fin has a black spot near the last section. Its maximum length is approximately 35 centimeters and its weight is around 2 kilograms. The perch lives in permanent shoals near aquatic plants or rocks. A favorite with all fishermen, the perch has delicate, tasty white meat beneath its thick protective skin.

The tench has a thick, squat body and a small mouth with a barb at each corner. Its small scales are covered with a thick slime. Its back and sides are olive green with bronze glimmers, and its belly is yellow. The tench reaches a maximum length of 60 centimeters and lives on the muddy, slimy lake bottom full of plants. It mainly feeds on invertebrates and parts of aquatic plants. The vital functions of the tench slow down when it goes into hibernation in the winter. The slightly fatty meat of the tench is tender and flavorful. The muddy taste it sometimes has in the summer derives from a certain algae eaten by the tench and can be eliminated by keeping the fish alive to “purge” for a while in fresh clean water. The tench is best when eaten outside of the spawning period.

The trout has a thick, squat body and a small mouth with a barb at each corner. Its small scales are covered with a thick slime. Its back and sides are olive green with bronze glimmers, and its belly is yellow. The trout reaches a maximum length of 60 centimeters and lives on the muddy, slimy lake bottom full of plants. It mainly feeds on invertebrates and parts of aquatic plants. The vital functions of the trout slow down when it goes into hibernation in the winter. The slightly fatty meat of the trout is tender and flavorful. The muddy taste it sometimes has in the summer derives from a certain algae eaten by the trout and can be eliminated by keeping the fish alive to “purge” for a while in fresh clean water. The trout is best when eaten outside of the spawning period.