The main town nearby Residence Lago di Garda has a ancient origin, up to 2000 years before Christ. The place name comes from latin name Tulles and the ancient Roman name of lake Garda, Benacus. Torri now is a beatiful medieval town with a well-preserved Castle of Scaligeri, recently restored, and a nice old town with medieval churchs and palaces, rich of little restaurants, tipical shops and nightlife local. Several events are organized throughout the summer season: music, theatre and expositions.

A quiet town located on the eastern shore of lake Garda, appeals its visitors due to timeless romantic charm. Approaching by boat is the best way to appreciate its beauty: in the distance, you see the mighty Castle of Scaligeri and gives an idea of how Antonio della Scala has governed this place, inhabited from Roman times. Now the Castle hosts a worth seeing folklore museum. In the picturesque small lanes of the old town centre, life is calm and easy, and the long walkway invites you to stroll along. The oval shaped harbour reaches up to the old town. With its colourful fishing boats swinging back and forth like pearls strung together on a chain, the harbour becomes on idyllic and peaceful spot to relax. 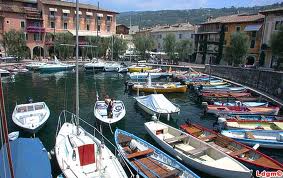 This ancient fishing village, which sits on a characteristic cone-shaped hill, where Monte Baldo gently slopes towards to Punta San Vigilio, is quite charming with its small port, square, narrow streets and old buildings painted in the same warm shades of Venice. Surrounded by olive groves are new homes, camping sites, tourist resorts and hotels that provide fine accommodations all year round. A ferry service for cars, buses and passengers that unites Torri and Maderno (on the west shore) is available all year round.

At one time it was the center of trade in the town: cargo ships traveling between Desenzano and Riva and “bisse”, typical fishing boats of Lake Garda, used to dock there. On the northern end of the port sits the 15th century “Palazzo della Gardesana”, the seat of the “Gardasana dell’Acqua” council, a federation of ten communities that also had the task of suppressing and controlling smuggling on the lake during Venetian rule. The council chapel in the nearby S.S. Trinità Church still conserves 14th – 15th century frescoes of the Veronese School. Beneath the porticos, caulkers built and repaired boats. The vaguely shell-shaped quay is considered to be from the Roman period.

Built at the beginning of the 18th century upon the ruins of another church, the parish has many Baroque style marble altars. There are valuable altar pieces by Cignaroli, Rotari and Brentana. The statues inside are by Michelangelo Speranza. The impressive organ was built in 1745 by Angelo Bonatti of Desenzano.

The Castle of Scaligeri

The castle was a commission of Antonio della Scala, the last lord of the Della Scala family of Verona, and built in 1383 upon the ruins of an existing manor house dating back to the late Middle Ages, possibly the 9th – 10th century. Today it contains a small museum with an exhibit of the rock engravings found on Mount Baldo and rooms dedicated to fishing, olive growing, and stone working. A lemon grove with its characteristic enclosures stretches along its southern side. The lemons kiosk was built in 1753 and is still conserved using traditional methods.

There are approximately 6 km from Residence Lago di Garda and it’s fast reached by car or an interesting bike ride along the lake Garda.