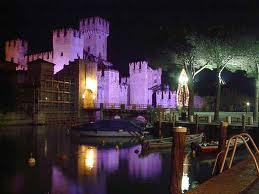 One of the best known resorts on the Lake is located at the far end of a long, narrow peninsula. Especially at weekends when the place is swarming with Italians on a weekend-outing and tourists from all over the world, the narrow, winding lanes in the romantic old town are packed. The entrance to the centre is dominated by the castle, the Rocca Scaligera.

The ruins of one of the largest Roman villas, the “Grotte di Catullo” can be admired at the top end of the peninsula. During the day the panoramic view of the Lake is most impressive and at night-time the sea of lights from the villages and town on the Lake is fascinating. Already during Roman times Sirmione was renown as a health resort. The sulphur springs, which are said to help ailments such as rheumatism and breathing difficulties, come out of the ground of the Lake just next to the peninsular.

The long and narrow strip of land extending out into the lake between Desenzano and Peschiera is utterly enchanting. Caius Valerius Catullus, Giosuè Carducci, Antonio Fogazzaro, Ezra Pound, and James Joyce extolled its beauty. The most populous district of the community is Colombare, which is the location of many public buildings (Town Hall, pharmacy, schools, library, travel agencies, etc.). The other districts are La Rovizza and Lugana, which was the site of the Lucana woods with fir trees, beech trees, ash trees and oaks and many types of deer and wild boar. Once a fishing village, Sirmione is now one of the most famous and popular tourist spots offering a wide range of modern facilities. Besides its fine hotels and camping sites, it is also the home of the Boiola hot springs and has a center for the treatment of rhinogenous deafness.

Sirmione : The history of Sirmione spa

It all started in 1889, when Procopio, a Venetian deep sea diver, equipped with a diving suit and special pumps supplied from England, dived to a depth of 20 metres into Lake Garda. In the area around Catullus’ villa, he was the first person to reach a hot water spring which had been known to exist for three centuries. After several attempts, Procopio succeeded in planting a long tube into the rock face. From the end of this tube, a jet of hot sulphurous water gushed to a height of 5 metres above the surface of the lake. It was a momentous achievement, this was the first step in the long and difficult process of laying 300 metres of metal pipes, which at last carried the precious thermal waters to Sirmione. In 1900 the first Spa Establishment was opened, and two new sources were opened at the original Boiola spring. Two further springs were opened, and the thermal water from these springs offered the same chemical and therapeutic properties as the original Boiola spring. The thermal spring water was transported through a network of pipes to the Catullo Spa Complex in the old town of Sirmione, as well as to the Spa hotels and to the Virgilio Spa Complex, which was opened in 1987, at the base of the peninsula.

Certainly of Lombard origins (8th century), the church sits near a Roman villa on the top of the highest hill of the peninsula (according to some scholars, Mavina derives from “summa vinea”, which means highest vineyard). It has only one nave with an irregular rectangular layout, one large central apse and two smaller ones on the side. The 9th century Romanesque bell tower is 17 meters high.

Three parish churches are worth visiting: Santa Maria Maggiore, which dates back to the end of 15th century and has only one nave and five altars; San Francesco d’Assisi, which was inaugurated in 1969 in Colombare; and Santa Maria di Lugana, which was built between 1910 and 1913. The S. Vito and Sant’Orsola churches are also very interesting.

The Venice Republic had the castle built in the 15th century upon the ruins of a Roman fortress for the Della Scala family in exchange for their control of the fiefdom. The first courtyard was once a garden where guards on duty controlled the mainland from the embrasures. The prison was located below the 47 m tall keep. A stairway with 150 steps could be taken to the top for a lovely view of the lake and surrounding area. The imposing structure, which was recently restored, is one of the main attractions in Sirmione.