The small town in the south-west is embedded in a long bay and has thus got the longest walkway of any town an the Lake. The historic old town, which dates back to the Middle Ages, is ideal for shopping and strolling around as many of the elegant and chic shops invite you to linger.

In 1901 Salo was almost completely destroyed by an enormous earthquake. The only reminder of the tragedy are the remnants which today serve as the foundation of the elegant walkway on the Lake. Slightly outside the town, on the southern side of the bay, the beautiful, long pebbly beach is situated. This is a favourite weekend spot for Italian families. Salo’s local cuisine is also well known, in particular the fish specialities served in numerous restaurants are truly delicious.

Sitting on an enchanting gulf at the foot of Mount S. Bartolomeo (568 m), Salo’ is the capital of the Upper Garda area within the province of Brescia. The old city center between Piazza Carmine, the “Fossa” and the lake shore is a dense network of streets, alleys and small squares lined with elegant homes, shops, restaurants and bars. There are many hotels and some first rate inns and rooms to rent. The market held every Saturday morning is very popular. Neighborhoods of the town (Barbarano, Campoverde, Cunettone, Renzano, San Bartolomeo, Serniga and Villa) are marvelous spots for excursions and walks. Fishing, windsurfing, rowing, yachting and tennis are readily available. There are public facilities for swimming, football, volleyball, basketball and bocce, while private facilities are available for dance, gymnastics, fencing, judo, etc. Salò, which lies between the Valtenesi, Valsabbia and the Upper Garda areas, is in a particularly favorable geographical position. Public transportation to and from Desenzano, Brescia and Riva is quite good, and there is regular ferry service between the major towns on the lake from March to October.

The church dates back to 1476 and contains a triptych portraying the Nativity with Saints Francis of Assisi and Joseph by Zenon Veronese, who also painted the altar-piece (1532) on the high altar.

Both buildings, which sit on the lake front between via Conforti and Piazza della Vittoria, are municipal offices today. The first dates back to 1524; the second was reconstructed in 1905 after the 1901 earthquake which caused considerable damage. The council room contains the bust of Gasparo da Salò by sculptor Angelo Zanelli. On the ceiling is a fresco entitled “The Triumph of the Cross” by G. Andrea Bertanza. Frescos by Angelo Landi can be seen in the entrance. There are coats of arms and memorial stones beneath the portico joining the two buildings.

Salò : The Library of the Academy of Salò

The poet Filippo Meio Voltolina of Salò founded the “Accademia degli Unanimi” in 1564 to encourage cultural activities. That led to the creation of a library which now contains 25,000 volumes. There are also 13th century manuscripts, incunambula, codes and documents of the Magnifica Patria from the early 16th century. The library is open Tuesdays and Thursdays from 3:30 to 5:30 p.m. (phone: 0365 – 20338). 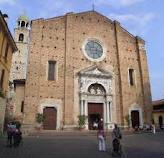 The Cathedral sits at the center of the town in the same spot where a pagan temple and, later, S. Maria Parish Church once stood. The first stone of the church, dedicated to S. Maria Annunziata and designed by Filippo delle Vacche, was laid on October 7, 1453. The facade and portal are quite beautiful. Inside is the chapel of the Holy Sacrament, with decorations by Giovan Battista Trotti, better known as Malosso. There are many paintings and frescos by Palma di Giovane and Antonio Vassilacchi, and an antique wooden crucifix by Giovanni Teutonico. The polyptych by Paolo Veneziano (1300 – 1362), two paintings by Romanini (1484 – 1566), and works by Zenon Veronese (1484 – 1553), Moretto (1498 – 1564), Andrea Celesti (1637 – 1712), G. Andrea Bertanza, and Angelo Landi (1879 – 1944) are noteworthy. In July, classical music concerts are held in the square before the Cathedral.

Not just lemons and citrons

but also liqueurs, chocolates, cookies and jams. Lemon orchards on Lake Garda gave a boost to an authentic industry. The production of citron juice began in the mid 18th century, and the beverage, considered a medicinal elixir, was even exported to the United States. Citron-juice drink, which is publicized by Italy’s most famous pop star, Mina, and lemon and citron-flavored chocolates are the most famous examples of an agronomic tradition that has influenced life on Lake Garda for centuries.