The second largest town on the Lake (13.000 inhabitants) after Desenzano is a lively, elegant resort in the north of the Lake. The beautiful old town, which is reached via the old gates, is full of pretty corners. Due to its varies sports- and free-time programme Riva has something to offer for every taste. Lovers of water sports, mountainbiking and climbing can choose from a large selection of offers. The town centre is dominated by a colourful mixture of solemn visitors, families and sports fanatics. The most beautiful and largest of the beaches around the Lake is to be found in Riva. The mild climate favours a Mediterranean flora: the town has the characteristics of an oasis surrounded by impressive mountains. 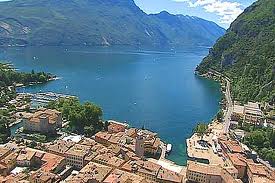 Surrounded by imposing mountains, Riva del Garda stretches along the crescent-shaped shore, extending to the Sarca plain and to the foothills of Mount Brione, which separates it from Torbole. In this Mediterranean oasis where olive trees and palms thrive, tourists can enjoy a delightful holiday with much to offer: history, art, sports and nature, as well as hospitality and first class hotels. Riva was already a popular tourist spot at the end of the last century. Some of its famous guests were Nietzsche (who stayed at Hotel Du Lac), the Hartungen family, the Mann brothers, the Brods, Kafka and Lawrence. Over 10,000 foreigners visited Riva in 1901; more than 37,600 tourists, mostly from Austria and Germany, arrived in the town five years later. This growth gradually continued until World War I, which left its mark on the small town. After it became a part of Italy, Riva developed its tourism industry and improved its sports, business and cultural facilities. Today Riva is one of the leading tourist spots of Lake Garda.

Many high profile cultural, tourist and sports events are organized in Riva. The town has done to promote and showcase its immense historical patrimony from the Middle Ages, of which much can still be seen today (city walls, portals, towers, moats), and the breathtaking surroundings along the coast and in the hinterland.

On the square surrounded by 14th century porticos are Palazzo Pretorio from the 14th century and the Apponale Tower built in 1220 and raised in 1555. The 34 m tower, built to defend the town, had salt and grain stores, storerooms, and exchange banks at its foot. It was used as a prison, then as an observation post during World War I. Above it stands the city emblem called “l’anzolim de la tor”.

Built following an agreement in the 12th century between Altemanno and the townspeople of Riva, it was later enlarged by the Della Scala family, the Venetians, and the Bishop Princes of Trent. The Austrians renovated it in 1852. It houses the Civic Museum with archeological, geological and mineralogical exhibits, an art gallery, and collections of weapons, prints and rare books. Civic Museum – Piazza Battisti, 3 – phone: 0464-573869 Admission is free for visitors under 20 and over 60 years of age.

The Venetian fortress, built in 1508 on a hill of the steep slopes of Mount Rocchetta, affords a splendid view of the city and the northern part of the lake.

First mentioned in documents of 1106, the church underwent restoration in 1728. It has a single nave, nine baroque altars and the Suffrage Chapel, with decorative stucco. Behind the beautiful high altar with marble inlay is the large painting of the Assumption by Craffonara. The church has contains the best work of Craffonara entitled “L’Addolorata”.

Located on the main road leading to Riva del Garda, the small 12th century Romanesque church has a cone-shaped bell tower with mullioned windows. The external frescos date back to 14th century. At one time it was used by the adjacent leper’s hospital run by the minor friars.