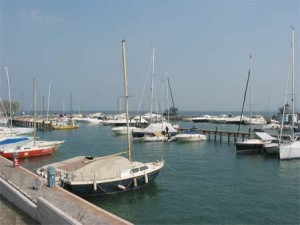 Moniga is situated further inland surrounded by beautiful olive trees. The 13th century castle on top of the highest point is impressive and worth a visit. Passing through the gate of its tower one finds oneself inside the small village. Due to its pretty pebbly beaches Moniga is very popular with families. Connoisseurs of wine also frequent this place as Moniga is the centre of the Chiaretto wine production. A 10km panoramic drive through the region where the Chiaretto is cultivated starts at Moniga and leads to Salo’.

Moniga was supposedly named after the goddess Diana Munichia, and some scholars believe a temple dedicated to her once existed in the area. The town lies at the center of the hills that stretch from Desenzano to Salò. The old part of the town sits on a hill, while the modern section surrounded by olive trees descends to the lake and its picturesque port. The economy is based on tourism, and there are many hotels, camping sites, residences and services. Olive groves and vineyards flourish in the area. Moniga is the largest producer of “Chiaretto” a local wine that is famous worldwide.

The walls which enclose the town were built in the 10th century to face the Hungarian invasions. The castle sits near the main road and is still in fairly good condition. Rectangular in shape (60×80), there is only one entrance at the center of the eastern wall, where signs of an old drawbridge can still be seen. The crenelated city walls have four small round lookout towers on each corner. Three more towers are situated at the center of the north, south and west walls. The square keep is now a bell tower.

In his estate in Moniga, Pompeo Molmenti (1852 – 1928) — a lawyer and professor of the History of Art at the Accademia in Venice, a member of the Parliament and, after 1909, a senator of the Kingdom of Italy – was actively involved in farming and, in particular, in the cultivation of grapes and wine-making. In 1896 he “invented” Chiaretto, a light red almost cherry-colored wine with a well-balanced floral and fruity bouquet and a dry, mellow, full-bodied flavor. As Carlo Bresciani said, “This wine, which is not pressed, is not a red wine with the fragrance of a white wine, nor is it a white wine with the body of a red one, or a soulless rosé wine. It is an unparalleled, distinctive wine that combines several qualities.” Each year Moniga dedicates two events to this wine: the “Palio del Chiaretto” in April, and the “Rassegna del Chiaretto” in July.

Facing the castle, it is one of the oldest parish churches of the Valtenesi area. It was consecrated in October 1454 and enlarged in the second half of the 18th century. The church has five noteworthy altars: besides the high altar with an image of S. Martino, there are altars dedicated to Saint Joseph, the Rosary, the Crucifix and the Holy Virgin Mary.