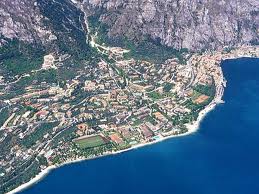 Who does not think of lemon trees in blossom, fragrant oleander and lush vegetation in the middle of a romantic landscape. Limone is located at the bottom of the steep Dosso di Roveri cliffs, which are so dominant that they seem to almost squash the place. The typical landmark are the groves of citrus trees on terraces overlooking the Lake. The old centre is popular with tourists who stroll along the steep and narrow lanes. It gets quieter and more romantic in the mountain region just outside Limone, where you can walk amongst olive groves. Here the well-known extra virgin olive oil is produced in the traditional way.

Situated on the northernmost tip of the Brescian side of the lake, Limone is an absolutely magical place with old fishermen’s homes, narrow winding streets, the pillars and walls of the lemon groves dominating the shore as far as Reamol, and olive groves on terraces that climb the hillside. Fifty-six hotels, two residences, many apartment buildings and three camping sites in an extraordinary setting guarantee a pleasant and relaxing holiday. The 1,000 inhabitants live in just over a square kilometer of land. The impervious valleys, forests and rocky cliffs that plunge into the lake create an almost enchanted setting.

The church, which sits at the center of an olive grove on the road that links Limone and Tremosine, is one of the oldest places of worship in the area. It was mentioned in a Bull of 1186 issued by Pope Urban III. Designed with a single nave, it contains priceless frescoes from the 13th and 14th centuries. Mass is celebrated on June 29.

The recently restored church was built in the 16th century as a votive offering in thanks for protection against the plague. Blending well with the rocks, lemon groves and lake, it has preserved original decorations and works of art in its interior. Faded fragments of ancient art are also visible on the facade. Mass is celebrated on August 16.

Dedicated to S.Benedetto, the church was rebuilt in 1691 by Andrea Pernici of Como in place of another smaller church from before the 11th century. There are numerous works of art inside. “The Deposition” (1547) by Battista d’Angolo, known as the Moro, is at the center of the high altar and flanked by two large paintings – “Supper in the House of Simon the Pharisee” and “Adoration of the Three Kings” — by Andrea Celesti (1637-1712). The stunning Baroque altar of the Crucifix made of yellow marble from Verona has four twisted columns and an exquisitely crafted tabernacle. There is also a life-sized Christ carved out of boxwood. The altar of San Antonio, in plaster with marble inlay, has an altar piece by Antonio Moro of Limone (1820-1899). A marvelous carved wood wardrobe by Giacomo Lucchini can be seen in the sacristy. Mass is celebrated daily.

The oil produced in Limone has special organoleptic qualities due to the climate, the soil and the variety of the plant. The olives are carefully harvested and processed. Workers climb tall stepladders to harvest the olives by hand, then the olives undergo the ancient cold press method that uses two heavy granite grindstones. The oil is sold at the cooperative shop, which is always open. From April to October the oil press is open to the public from Monday to Friday from 4:00 to 6:00 p.m.