The small town on the south-eastern shore has a particular atmosphere. The old town centre, which can be reached via three gates is surrounded by city walls dating from the 14th century. During the Venetian reign Lazise was an important trading place. Today old fishing boats can be admired alongside modern yachts in the small harbour right in the middle of town. There is a wide selection of restaurants, cafes and bars around the big piazza as well as along the waterfront. In the pretty narrow lanes many shops such as delicatessens, jewellers, art galleries, shoe shops and first cl

Between Bardolino and Peschiera lies the town of Lazise whose name comes from “laceses”, which means “place on the lake”. The oldest part of the town, clearly medieval in origin, is surrounded by the walls built by the Della Scala family in the 14th century. A castle dominates the charming setting. With its picturesque corners, Lazise is an enchanting place, especially Piazza V. Emanuele and the small port, which is still crowded with fishing boats. Many shops, restaurants, homes and porticos with coffee bars face the square and port and line the narrow streets. Pacengo and Colà are two districts that are a part of the Lazise municipality. In the past, the economy was almost entirely based on fishing and agriculture, especially vineyards and olive groves. Today, however, tourism is its major source of revenue. Lazise has become one of the most popular resorts on the “Riviera of the Olive Trees”. It offers a wide range of hotels, restaurants, apartments, rooms to rent and camping sites. In its local restaurants, you can enjoy dishes made with the delicious fresh water fish from the lake and extra virgin olive oil from the area, and drink the excellent wines from the Verona and Garda areas.

Built at the end of the 9th century to afford protection against the Hungarian invasions, the castle was modified and reinforced over the centuries. One of the best preserved in the Garda area today, it has a square plan with five towers and a keep. The coats of arms of Bartolomeo and Antonio Della Scala are still visible on the two entrances, even though Emperor Maximilian had them defaced. “La giustizia del mondragòn la ghe dà torto a chi g’ha rasòn’ (The justice of the dragon punishes he who is right) was what the people of Lazise used to say. This proverb, which referred to the coat of arms with the dragon that was displayed on the castle walls, aptly expresses their distrust of tyranny. The castle is situated in the Villa Bernini park. 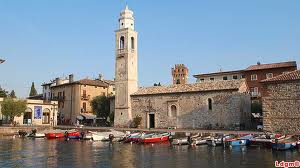 First mentioned in a document from 1295, the church was dedicated to San Zeno, the patron saint of water and fishing. It was renovated at the end of the 18th century, first by architect Luigi Trezza and then by Francesco Ronzani. Inside, the San Martino altar piece (1828) by C. Dusi and the Via Crucis (1831) by P. Testoni merit a visit. The statues on the pediment of the facade are by A. Spiazzi.

The church was built in the 12th century by the Origenists and dedicated to San Nicolò of Bari, who was venerated during the Middle Ages as the patron saint of schools and seamen. The church was enlarged in the middle of the 16th century. It was later used as a store, theater, barracks, home and cinema. The church was consecrated again in 1953 and later became a War Memorial chapel. The external northern wall is decorated with the fresco of the “Madonna Enthroned with Child”, which dates back to the 14th century. Mass is celebrated in the church during the summer.

Built in the 14th century, this building was used for many purposes down the centuries. It was the arsenal of the Della Scala family and later of the Venetian Republic. Nitroglycerin for gun powder was made here. It later became the Customs House for goods entering and leaving the Venetian Republic. It was then turned into a cotton textile mill and later became the headquarters of the Fascist Party. The building was renovated in 1973; today it is used for exhibits and cultural events. It is 43.10 meters long and 23.50 meters wide. Its ceiling is 10 meters high on average, and there are two arches 8.75 meters wide at the base. Its architectural style is quite unusual for the period in which it was built.