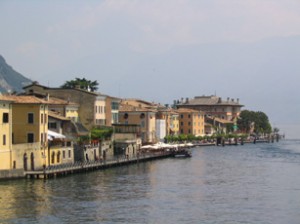 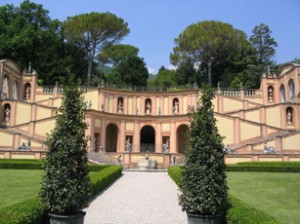 Gargnano on the western shore of the Lake consists of three parts: Bogliaco, Villa and Gargnano, the main town. Some hundred years ago Gargnano was a place favoured by the rich. Today this can be seen in the fine villas, palaces and beautiful gardens which still remain.

However, the town has seen an eventful past: 1866 Gargnano was fired at by Austrian warships. Up to this day the fired cannon balls are lodged in the walls of the palazzi around the harbour. Every year during the first weekend of September the best known sailing regatta on Lake Garda, the Centomiglia (100 miles), takes place in Bogliaco. This is a unique spectacle which is well worth a trip.

The area, dominated by Mount Denervo (1459 m), consists of the town of Gargnano, whose houses cluster around the small port, and twelve hamlets, some on the lake (Villa and Bogliaco), others situated on the gentle slopes (Villavetro, Fornico, Zuino, Navazzo, Musaga, Muslone), and still others in the hinterland (Sasso, Liano, Formaga, Costa). All are linked by convenient scenic roads that travel through olive groves and cross meadows and woods. Along the lake are innumerable citrus fruit and lemon groves which, with the fishing industry, became an important economic resource starting in the 18th century. Bogliaco, home to the Yacht Club, hosts several international regattas, the most important of which is the “Centomiglia” (hunfred miles), Europe’s most important regatta of inland waters. Countless excursions on foot, on horseback, by mountain bike or car can be taken through the lovely hinterland. Numerous hotels and restaurants offer delicious local fare, including grilled meats and fish, polenta and many other tasty dishes.

Constructed in the 11th century above the remains of a Roman building, the church was later enlarged in the first half of the 19th century, when the project by architect Rodolfo Vantini added two majestic domes. The church has five altars with paintings by Andrea Celesti, Andrea Bertanza and G. Bettino Cignaroli.

The monastery was founded by the Franciscans in 1266, and the church was built in 1289. The inner courtyard of the cloister is lined with porticos on columns whose bas-relief capitals are decorated with fish, birds, leaves, lemons and limes. 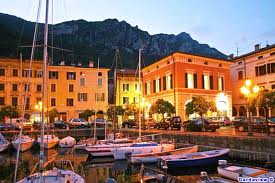 This classic, elegant 16th century building in the style of Todeschini (1524 – 1603) dominates the square and port. A memorial tablet beneath the portico commemorates the bombardment of 1866.

Designed by architect Adriano Cristofori (18th century), it is the finest villa on Lake Garda. The balustrade above its wide stairways is adorned with stone statues of mythological figures. The villa contains priceless works of art: paintings by Palma il Vecchio, Canaletto, Paolo Veronese, Andrea Celesti and Pitocchetto, fine collections of antique furniture, rare books, stuccowork and decorations. The spectacular garden designed by Amerigo Pierallini has a semicircular layout.

Rising above the locality with the same name, the hermitage sits at about 700 m above sea level. It can be reached on foot from Sasso along a trail that affords a magnificent view of the lake. The small 17th century church, built as a votive offering for protection from the plague, has been recently restored.