The nearest Residence Lago di Garda municipality is a union of 16 small villages and there’s no a main town. Part of them are along the Garda shore and other are spread over the Monte Baldo mountain. The lakeside villages, with their pretty harbours, are well known for their fish specialities such as eel and sardines, prepared in different ways: fresh, salted, or dried. The largest village, Castelletto, can boast with a pretty old centre and a lakeside walkway. All villages is an excellent starting points for Monte Baldo hikes and very popular to nature-lovers, hikers and cyclists.

The Brenzone area includes the little towns of Castello, Castelletto, Marniga, Magugnago, Porto and Assenza plus other smaller villages in the mountainside (Sommavilla, Biasa, Marniga and Prada, also a winter tourist point). The small island of Trimelone, used early as a military depot, is located in front of Assenza. The town is not very inhabited and has preserved many characteristics of the past. As tourism is its main industry, the lakeside is lined by many hotels, residences and camping sites. Restaurants offer local dishes and specialties from the area (fish, olive oil, wine, etc.). One of the best sites is the “Acquafresca” Sports Center of Assenza for the exciting regattas and the Castelletto Yacht Club.

The church is considered one of the oldest examples of Christianity in the area. The eastern wing of the building dates back to the 11th century, and the western wing to the 12th century. The church has three apses, two aisles and a cycle of frescoes from the 13th century depicting the life of Saint John the Baptist. Interesting Roman artifacts have been unearthed in the adjacent graveyard. 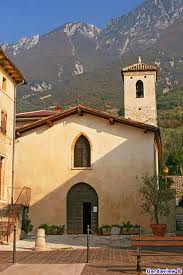 The church dedicated to St. Nicolas is located at Assenza. The sacred place is mentioned in documents of 757 and of 769, but the actual building dates back to the 14th century. The interior has Gothic arches decorated with frescoes. The altar has a painting of the Madonna with Child, with San Zeno on the right and, in a corner, some believers who are members of the Ivani family that donated the work of art.

The church was enlarged and restructured many times during the 18th century. Inside there is a 16th century crucifix and an altar piece depicting the martyrdom of Saint Sebastian, which was painted by Giovanni Caliari (1838). The Romanesque bell tower is from the 15th century.

On Good Friday, the trail from Castelletto that winds through the olive groves to the quarters of Biasa and Fasor becomes the striking setting for the Stations of the Cross. The 14 stations are situated along the route. The townsfolk themselves interpret the Passion play while a choir sings Latin hymns.

Campo is a small hamlet of medieval origin that sits in a sunny hollow surrounded by rocks and old olive trees. Located on the trail that links Castelletto to Prada, it is now in ruins and abandoned. The remains of a castle are surrounded by houses with lovely stone arches, vaults and portals and the small Romanesque church of S. Pietro in Vincoli, with frescoes from the 13th 14th centuries. Take time to stop at the old fountain and admire the ancient millstone used for olives and grains. For the past twenty years, the people of Brenzone have spent Easter Monday at Campo. On that traditional occasion, “bigoli con le agole” (spaghetti with alborella fish) and “ôf dur” (boiled eggs) are cooked for everyone.

The nearest town of Brenzone is Castelletto, less than 3 km from Residence Lago di Garda, can be reached by foot through the lake walk. The Monte Baldo towns are recommended to reach by bicycle or by car.