The Villa dei Cedri is a typical neoclassical construction of notable sobriety and harmony. It has three floors, two “piano nobile” and a third for the servants. It doesn’t follow the traditional layout of the Villas in Venetia, but is more similar to the Lombard style.
The central body has a triangular tympanum which, in the façade facing the park, rests on four pilasters with Corinthian capitals. These rise to the two upper floors; at the base end is the embossed volume of the ground floor. The Villa dei Cedri was initially restored in the early 1900’s, when the green stone portals that characterise the secondary entrance were added. A fountain was installed in the dining room, the halls were decorated with stuccoes and columns in eighteenth century style. Furthermore, you will find particular “bathrooms” typical of the neoclassical period with baths made of marble from Carrara.

The traces of frescoes dating back to the late eighteenth or early nineteenth century are of particular interest. Some of the furniture in the Villa dates back to the early nineteenth century, including armchairs and console tables. Surrounded by a park of 13 hectares, with its original form and arboreal architecture (with cedar, holm-oak, sequoia, fir, magnolia, exotic plants, etc.), a charming little lake completes the beautiful picture.

The lake is roughly 5,000 m2 and is equipped for hydromassages of various kinds, fountains etc. It is lit in the evening so bathing at night is also possible. There is an enormous circulation of the water, equal to volume of half the lake per day (roughly 3,500 m3. of water in 24 hours). 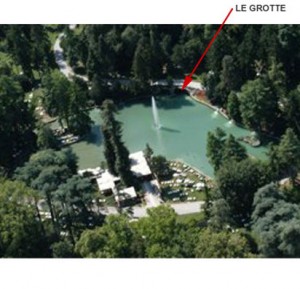 The grotto hydromassages are an excellent exfoliating scrub that prepares your skin, freeing it from the dead cells, to receive all the benefits of the water. The various jets massage your body, freeing it from toxins.

In this way the circulation is improved and your muscles relax, becoming more elastic and tonic. The recommended time for treatment is from 10 to 15 minutes, in several sessions, but your body will let you know when it’s completely relaxed. The waterfalls on the right of the exit of the grotto are ideal for massaging the buttocks, thighs and waist. We recommend moving during the hydromassages and stopping for 10 minutes during the sessions.