The “Malga Ciapa” Alpine Refuge on Tremalzo– The arduous, spectacular ascent to Tremalzo deserves a reward that is more than a mere restaurant crowded by Sunday tourists aboard their cars or motorcycles. Malga Ciapa, which is just below the end of the asphalted road traveling from Lake Ledro to Tremalzo, is the ideal place to recharge your batteries before the long descent heading to Riva del Garda or Limone. Owner: Lucio. Altitude: 1650 mt..
Location: Località Tremalzo, Tremosine. Directions: From the Garda refuge, head towards Vesio. At the second curve, youll find Malga Ciapa. From Tremosine, heading towards the San Michele valley, youll find Malga Ciapa on your right, slightly below the Tremalzo Pass. Specialties: Wild game, shish kabobs, polenta and mushrooms, and typical local dishes
Beds: 24. Open every day from Spring until mid-October.
Tel/Fax . +39 0365 918628.

Construction of the first refuge on Mount Altissimo (2,060 m) began in 1888 through an initiative of several S.A.T. members from Rovereto and Brentonico. The building was inaugurated on June 6, 1892 and provided hospitality to a growing number of mountain climbers and hikers. Expanded in 1905, it became a base for Italian troops during World War I, but was never damaged. It was reopened in 1919 and named after Trentino patriot Damiano Chiesa. Entrusted to the S.A.T. of Rovereto since the fifties, it was subsequently transferred to the Brentonico chapter and then, in 1965, it was transferred to the Mori chapter, which supervised the recent remodeling and enlarging project (1995).
A panoramic point named after Barons Argia and Ugo Salvotti was inaugurated in 1988 near the refuge and also indicates the surrounding peaks.
There are 20 beds, and a winter shelter with six beds.
Tel. 0464.520664 e 0464.867130 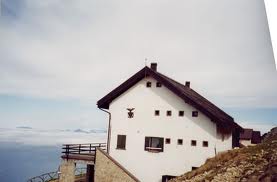 Sitting at the top of Mount Stivo, an exceptional panoramic spot overlooking Lake Garda and Val Lagarina, at an altitude of 2,012 m, this refuge is dedicated to Prospero Marchetti, the co-founder and first president of S.A.T. Active since 1906, it has been run since 1954 by the S.A.T. Chapter of Arco, which supervised the remodeling project in 1988 and the installation of a wind-powered electric plant in 1999. Easily accessed from the Arco side, from the “Monte Velo” refuge and the Bordala Pass, it has 20 beds. The winter shelter has 6 beds.
Tel. 0464.520664

The refuge sits at an altitude of 976 m on Mount Calino in the Ledro Alps, near an old church from 1683. The adjacent hermitage, which was bought by the S.A.T. chapter of Riva del Garda in 1930, was expanded and turned into a refuge in 1931. Remodeled in 1997, it has 18 beds. It can be easily reached by road from Ville del Monte or from Calvola, both hamlets of Tenno. Interesting itineraries travel from Gavazzo to Val Gola following trail 401 (2 hr 15 min) and from the Lomasona “malga” Alpine farm (from Dasindo) following trail 410 (2 hr).
Tel. 0464.500647 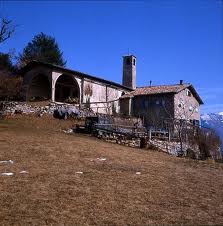 Located on the eastern side of Mount Baldo, at an altitude of 1,232 m, the refuge can be reached by car from Spiazzi and from Ferrara di Monte Baldo. The Baldo Botanical Garden, tended by the Forestry Service, is nearby.
Tel. 045.6247022

This refuge sits at an altitude of 1,430 m near the Bes-Corna Piana Reserve, one of the most interesting natural parks that covers nearly 150 hectares on the northern side of Mount Baldo, at the foot of the Altissimo in the town of Brentonico. Set up by the local S.A.T. chapter in the Fos-Ce chalet, it was inaugurated on August 20, 1981. It has 9 beds. It can be accessed from San Giacomo beyond San Valentino and from Avio, by way of Preafessa, along trail 685 at Fil della Cola, the Cola Pass (1,289 m.) and the road for Pra della Stua lake (6 hr 30 min). Hiking trails to the Graziani refuge and the Damiano Chiesa refuge on Mount Altissimo in Nago (1 hr 45 min) and to Corna Piana from San Valentino along the Vipere (viper) trail (trail nr. 650) to the Bes Malga Alpine farm (2 hr).
Tel. 0464.391450 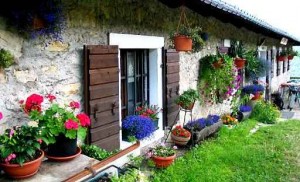 The “Giorgio Pirlo” Refuge on Spino

Located on Mount Spino, in the town of Toscolano Maderno, at an altitude of 1.165 m., it can be reached from Sanìco di Toscolano Maderno, from San Michele di Gardone Riviera or from Gaìno. It is open from June 15 to September 15. During the rest of the year, it is open on weekends. Run by the C.A.I. chapter of Salò, it has 45 beds. For information and reservations: 0365.651177.

Cima Rest is in Magasa, a mountain community of Valle di Vestino with about 200 inhabitants. The Mountain Community of the Parco Alto Garda in Brescia, in cooperation with the local administration, the Lombardy Region, the Regional Forestry Agency and the Forestry Consortium of Valvestino, remodeled several hay barns with characteristic straw roofs for use as farm holiday establishments, created a small ethnographic museum, the “Lo scoiattolo” (the Squirrel) refuge – Corva malga Alpine farm, and the astronomic observatory, run by the Associazione Astrofili of Salò.
Information and reservations
For the hay barns: Consorzio Forestale della Valvestino – 25080 Turano di Valvestino (tel. 0365.745007 – fax 0365.745821 – E-mail consorzio.valvestino@libero.it)
For the farm holiday establishment: Giulio Venturini tel. 0365.74054; Bar Tavagnù tel. 0365.74067; 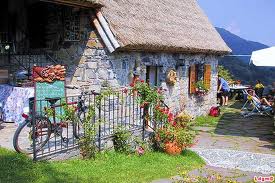 The “Lo scoiattolo” (The Squirrel) refuge, an old restored alpine farm house (Malga Corva), is recuperato da una Malga (Malga Corva), is available for tourists who love the mountains and appreciate creature comforts in a beautiful natural setting. The refuge is in front of the astronomical observatory and the ideal point of departure for hikes.
The Astronomical Observatory, which was built through the determination of the Astrophile Association of Salò and the efforts of Comunità Montana and the town of Magasa, is one of the most beautiful of the Lombardy region. The perfect vantage point for observing the sky without the interference of city lights, its splendid isolated location guarantees excitement for visitors.
“Lo scoiattolo” refuge
Culinary specialties: typical local dishes
Beds: 21 – Open every day from Spring to mid-October.
For reservations and more information: mobile phone: 339 4078519 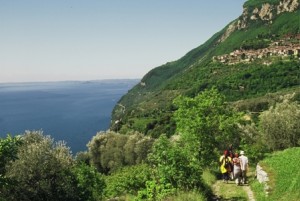 Located in Tremosine, on the road that travels from Bondo Valley to Tremalzo Pass (at an altitude of 1,170 m) and just 200 m from Nota Pass, this chalet is owned by the A.N.A. group of Pieve di Tremosine. It remains open at the discretion of group members and has 8 beds for use in the summer. For information: Capo-Gruppo A.N.A. Sergio Rossi (tel. 0365.953172).

Located in the town of Tignale at the end of an asphalt road that connects Olzano to Piemp Peak at 1,151 m, it is owned by the local A.N.A. group. It is open all year round without a manager, and has 15 beds. For information: Capo-Gruppo A.N.A. Sergio Poinelli (tel. 0365.73495).

On Nota Pass at an altitude of 1,200 m, and just a short distance from Valle di Ledro, the chalet was built in the former Finance Police barracks, which was in operation since 1915. It was recently remodeled by the A.N.A. group of Vesio di Tremosine. There are 20 beds available in the summer. For information: Capo-Gruppo A.N.A. Gianmaria Cavazza (tel. 0365.951190).

Located in Fortini, in the mountainous hinterland of the town of Limone sul Garda, at an altitude of 1,215 m, it has 4 beds and is open all year round thanks to the A.N.A. Group of Limone sul Garda. Water and wine are always available. For information: Capo-Gruppo A.N.A. Aldo Girardi (tel. 0365.954016). 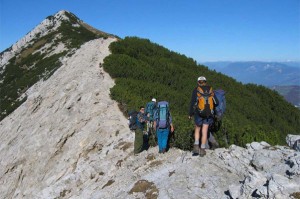 Located on Mount Baldo at Bocca Navene, at an altitude of 1,254 m., on the “Graziani” road, this refuge is open from May to October and has 10 beds. 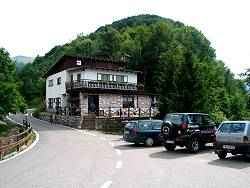 At Bocca del Creer, at an altitude of 1,620 m., on the northeastern side of Mount Baldo and just 5 km from San Valentino, it has 20 beds and is open from May to October. Many excursions are available: to Mount Altissimo of Nago and to the “Damiano Chiesa” alpine refuge, to the “Corna Piana Natural Reserve”, to the Bocca di Navene and to Bocca Tratto Spino.

– The obligatory opening period of S.A.T. refuges is from June 20 to September 20. Refuges can also be open in other periods of the year, especially on weekends and in the spring.
For information about S.A.T. refuges, please contact the custodians directly or the S.A.T. chapters: Phone: 0461.981871 – fax 0461.986462.
– A.N.A. chalets are open periodically. For information, please contact group leaders directly.