The busy small town is in the south-east of the Lake. Its special attraction is the old town centre, which is in the middle of an enormous fortress in the form of a five-sided star and completely surrounded by water. There are many nice shops and small bars in the narrow lanes of the old town. Monday is market day and surrounded by the fragrance of grilled fish and the mutual calls of the market stallholders, you really get the impression of being right in the middle of Italy. Peschiera is on the Verona-Milano trainline, the station is only a stone’s throw from the old town.

Peschiera del Garda is a river and lake town near important routes to the upper lake region, Verona, Mantua and Brescia. The huge bastions, the Mincio River (the only effluent of Lake Garda), the city walls and barracks surround the old city center with a massive belt of stone and brick. Peschiera del Garda is an important hub of tourism and trade. The lakeside area towards S. Benedetto di Lugana and the hinterland offer picturesque places, typical restaurants and delightful excursions among the olive groves and vineyards. Peschiera has many camping sites (over 6,500 spaces) and 45 hotels, apartments and rooms to rent. Soccer, tennis, skating, and “tamburello” are just a few of the sports available, and there are three riding stables in the area. The port is one of the biggest on the lake. Daily ferryboat and hydrofoil service from March to October lets you enjoy pleasant trips on the lake. 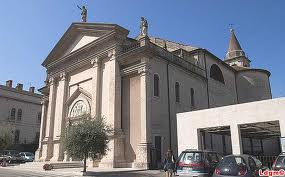 One of the oldest churches in the Verona diocese, the church was first mentioned in an ancient document from the first half of the 11th century. The church underwent extensive renovations in the 15th century. When the French took over the area at the end of the 18th century, it was turned into a hospital and military warehouse. The church was demolished and rebuilt in 1822. Pino Saoncella decorated the interior in 1937. Besides the high altar, there are four altars dedicated to the Madonna, to Blessed Andrea (with relics bequeathed to Peschiera in 1614), to the Sacred Heart and to Saint Anthony of Padua.

The sanctuary, about 3 kilometers from the town, sits in the hills that surround Lake Frassino. It was built at the beginning of the 16th century and renovated at the turn of the 20th century. The sanctuary houses the miraculous statue of the Madonna and notable works by Paolo Farinati (1522-1606) and Andrea Bertanza. The frescoes of the facade and the presbytery are by Bernardone Muttone il Giovane (17th century). The sanctuary is a place of pilgrimage and devotion.

The largest, deepest mountain lake (about 14 meters) in the morainic hills of the Lake Garda area, Lake Frassino was formed after the glacier of the Quarternary Era (Middle Riss) slowly withdrew. This protected area surrounded by reeds is a nesting place of swans. It is expected to be used exclusively for study and research.

The river flows from the natural morainic hills through the communities of Peschiera and Valeggio, with its lovely hamlet, then enters the Mantua province at Ponti. This is point where the Mincio Natural Park, established in 1984 by the Lombardy Region, begins (information c/o Ppeschiera naturale del Mincio – Via Marangoni, 36 – phone: 0376/362657). A breeding and re-population plan for the white stork in the Mincio National Park is now underway. The river is a favorite spot of fishermen who line up along its banks. The river is also used for many rowing competitions.

Located in Catullo Park, it is one of the most important buildings in the city. On November 8, 1917, after the defeat of Caporetto, King Vittorio Emanuele III summoned the major political and military authorities to order the resistance on the Piave River. The building houses a collection of relics of the Risorgimento and World War I: military equipment, weapons, photographs, etc. Volumes bound in sheepskin and decorated with gold list the names of all the soldiers who received medals of valor during World War I.

The city walls, a unique example of ancient defensive techniques, are of great artistic and architectural importance. The walls date back to the 16th century when the Venetian Republic was the indisputable ruler of the lake. Worthy of note are the Verona and Brescia Gates.