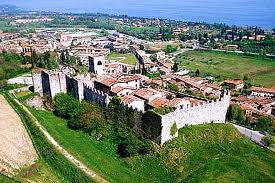 Padenghe is located on the south western shore of the Lake close to Desenzano. The picturesque hilly landscape of the Valtenesi starts here. The town with its small old centre is slightly elevated from the Lake. Via a small romantic road, a 1000year old fortress can be reached. In the yard a small estate with pretty vegetable patches has established itself. The view from the tower over the Lake and its nice beaches is breathtaking.

The medieval castle and nearby Sant’ Emiliano church (12th century) sit above the town. Works by important artists can be seen in the parish church, which is adjacent to the 18th century municipal building.

The ancient Romanesque parish church named Sant’Emiliano is close to the castle (if you return to the province road and travel 200 meters in the direction Bedizzole, you will come across a large square. At this point, take the narrow road to the left). This church, which sits in a lovely location, has a single chamber with semi-circular apse from the 12th century. The church underwent modifications in the Baroque period.

The parish church of Santa Maria, built in 1682, has paintings by Zenone Veronese (Madonna with Child and Saints, the subject is also portrayed in the same church by Paolo Farinati), Francesco Giugno, Francesco Paglia, G.A. Zadei, besides sculptures by Antonio Callegari and Beniamino Simoni.

Villa Barbieri (City Hall), which was built at the end of the 18th century and is close to the church, was recently bought by the city and has a rustic facade.

The medieval castle has preserved its original structure. With solid walls made of large stones, there are three towers (the middle one has collapsed) on the northwestern side. The plain square main tower rises above the entrance, which still has visible traces of openings for the drawbridge and a footbridge. The chatelain and troops lived in the “castellino” [little castle], which was built at a later date within the castle walls.