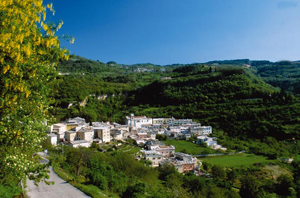 The name Molina derives from the past presence of many mills (in Italian, mulini) working thanks to the hydraulic force of the same springs from which the beautiful waterfalls of the Park are created. Visiting Molina allows you to have a break and to relax in a beautiful natural landscape: the village is immersed in the greenery, in the middle of three deep valleys among steep wood slopes and vertical rock walls. A visit to Molina also represents a step into the past: the village has maintained the characteristics of an ancient Medieval village and displays examples of the typical architecture of Western Lessinia. 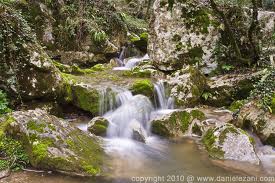 Only a few kilometers from Verona, in the green countryside, the Molina Waterfall Park awaits you with the beauty of its waterfalls.

Treat yourself to a moment of peace between nature and culture: a few steps from the Park, in Molina you will find the magic atmosphere of a small Medieval village.

The Molina Waterfall Park is located south-east of Molina, in Vaccarole, and covers 80.000 sqm.
It includes the last part of the Molina Valley and the area that connects it with the Cesara Valley and the “Vaio delle Scalucce” . The final emersion of the Lessini region took place during the Tertiary era, 25 -30 million years ago, and the rocks in this area, since the moment of their subaerial exposition, were subjected to the action of atmospheric agents which caused their modification and fragmentation.
The hydrographic system of the highest part of the Fumane valley has a fluvial origin and displays a juvenile morphology, with steep walls and V-shaped tight bottoms. The waterfalls were originated along the rivers because of the presence of rocks with different levels of erodibility.
The clayey waterproof layers of the Biancone limestone prevent meteoric water from filtering under the ground, thus causing the creation of springs.
Due to the action of the stream, we can admire characteristic shapes such as furrows, niches, and erosion materials, visible not only on today’s river’s course, but also on the side walls, testifying to the river’s course in the past.
This territory is characterized by its abundance of water, thanks to the existence of perennial springs north of Molina. Apart from the bubbly waterfalls, the Park also offers a landscape of woods and meadows, crossed by torrents and small rivers, and characterized by the green color of the varied vegetation and the grey of the rocks.
In the Park you can see a synthesis of the low-mountain landscape, where several paths and itineraries can offer visitors the calm solemnity of a crashing waterfall here, a colorful, full of flowers meadow between a wood and a precipice there, or the whirls of a tumultuous torrent.