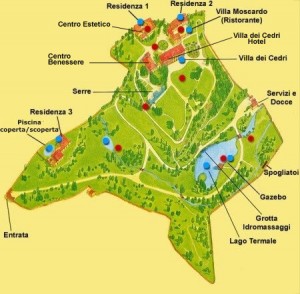 1. Spring/Summer
Surrounded by cypress, thuja, yew and ancient beech trees, a thermal spring discovered by chance transformed the splendid Villa dei Cedri park into a very special place, where you can find your wellbeing again in the warm waters of the thermal lake.
The Garda Thermal Park offers numerous possible pastimes, from sport, to wellbeing and relax. Nature lovers can go for charming walks in the hinterland, through the majestic ancient trees.

In the Garda Thermal Park you can also get a chance to appreciate some fine art: Villa dei Cedri, Villa Moscardo, the Caretakers’ Lodges, the Guestrooms, and Statues can give you an interesting look into the past of this park.

The Garda Thermal Park has a bar and a self-service restaurant, fitted out also for those who want to spend the whole day there. You can go for a picnic breakfast in the woods on the tablesand benches there.

In this period you will find the same things described in the spring/summer period.
Wood and glass gazebos have been installed near the thermal lake. These are heated and equipped with every possible comfort.

From the heated gazebos you can go directly to the lake through the tunnel, which is also heated. From inside the tunnel you go outside and, thanks to the temperature of the water (33- 34 °C), the body is protected from cold, at any outdoor temperature, even below freezing.

GARDA THERMAL PARK
In Colà di Lazise, a small town in the Garda hinterland in Veneto, the discovery of hot water was an extraordinary event.

The Villa dei Cedri was built along the lines of the Napoleonic Villas by architect Luigi Canonica between the end of the eighteenth and the beginning of the nineteenth century. It is just one of the buildings on the property it gives its name too, and it is without a doubt the most impressive of these.

The other buildings include Villa Moscardo, which dates back to the fifteenth century, on the facade of which there is a plaque to commemorate the visit of Emperor Charles V on the 21st of April 1530. Then there are the guest quarters and stables, a stately conservatory made of wrought iron dating back to the second half of the nineteenth-century, and three caretaker’s lodges, the most important of which is in neo-Gothic style. Other famous people stayed in the Villa dei Cedri.
In fact, in September 1943, after the armistice, Villa dei Cedri became the German general headquarters for the North of Italy under Field Marshal Erwin Rommel, while the headquarters of the South of Italy under Field Marshal Kesserling were in Rome. The Moscardo family, who bought the estate from the Sansebastiani towards the middle of the eighteenth century, are probably responsible for the form and design of the park. The work was continued and completed by Miniscalchi Erizzo, who owned the park from the end of the eighteenth century to the beginning of the twentieth century: the distinctive traits are Arcadian – eighteenth-century, with an airy development of paths and open spaces typical of the gardens of the nineteenth-century. The Miniscalchi were a famous family, related to a Venetian doge. They owned a monumental palace in the piazza delle Erbe in Verona, and built the Villa dei Cedri in a neoclassical style.

In a rare photo album of Richard Lotze from 1860, which is kept in the Miniscalchi museum in Verona, there are some images of the park, the floristic wealth of which has remained untouched by time. One hundred and fifty cedar trees (Cedrus atlantica, C. atlantica “Glauca”, C. deodara) and Abies alba, nordmannica, Pinus nigra, P. excelsa, Fragus sylvatica, P. “Purpurea Pendula”, Liquidambar styraciflua, Taxus baccata and T. bacctla “Frastigiata”) are just some of the species that can be found in the park. Before the main facade of the Villa dei Cedri the view of the lawn is framed by a wood of holm-oaks, just a few trees but with such an extension that on the ground below a sort of paving was laid for dances. A short distance away, a strawberry tree of impressive dimensions stands. It has long lost any similarity to a bush, and looks like some kind of prehistoric animal with a reddish hide.

When the park was created, the territory had the form of a vast basin, crossed in the centre by a torrent. The morphology of the place could have been designed to hold a stretch of water, which was the first element in the conception of the eighteenth-century garden. A plaque dating back to 1725, with Latin solemnity, tells the tragic story of two small children who drowned in the lake. This, along with local tales to the same effect, shows that the lake existed at that time, with the torrent diverted by pilings to fill the same. A stream flowed out of the lake, to return to the same torrent. This was so until a few years ago 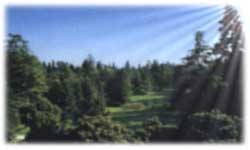 What happened in 1989?
The new owners, the Villa dei Cedri S.p.A. company, managed by Vittorio Nalin, decided to dig a well to develop the irrigation system of the vast park.

At a depth of 160 metres, the surprise: a hot water table, light, low in mineral content, rich in bicarbonate, calcium, magnesium, lithium, and silica (an important element in the prevention of arteriosclerosis).
The company had a brilliant idea: to replace the water in the lake (roughly 5,000 m2) with the hot water that flowed out of the bowels of the earth at a temperature of 37 degrees, using pumps to guarantee an exchange of 3,500 cubic metres of water per day, equal to half the content of the lake.

Under the gravel on the bottom there is a network of roughly 6 kilometres of pipes, with 1,400 injectors, that carry the thermal water to all the points of the lake so the temperature is uniform everywhere.
After flowing out of the lake into the stream, the water, which has cooled along the way, is used to irrigate the surrounding countryside and the park. It has proved excellent for producing healthy plants and crops.

But the surprises of this thermal lake don’t end here.
The grotto, built at the same time as the lake as a decorative element, is a real palace of pleasure: a triumph of hydromassage, with a variety of jets of water, from above for the back and neck, from below for the feet and fingers, and from above in a light, rain-like drizzle for the face.

There are waterfalls and jets of hot water everywhere, along the edges of the lake. You’re surrounded by the joyous sounds of water, gurgling and splashing, like the people playing and laughing in the water, or on the lawn before stopping for a picnic under the ancient cedar trees. You can relax on the comfortable, wood sunbeds, sinking into the white canvas.
The sun touches the tops of the two-hundred-year -old sequoias, the small wood of Taxodium distichum on the island, turning the lawn a deep shade of reddish-brown.

It’s not a traditional health spa; you won’t find that hushed and protective, if somewhat sad atmosphere. It’s nothing to do with those places, which can be relaxing but also bleak, giving you the idea that you have to find your wellbeing, heal you body and spirit, search for a state of health that’s somehow lost.

The “Paradeisos”, the mythical walled garden, separate from the world, is complete: an evergreen existence, with the plants that seem to project it into a timeless dimension. An age of geological mystery, almost forgotten.